The public becomes so immersed in TV series that the actors and actresses who play characters become lost behind the role they are portraying. This is a sign of a job well done, and is certainly the case with Kerry Washington, or Olivia Pope in the ABC series, Scandal, as many of us now know her. Kreol Magazine takes a closer look at the woman behind Olivia and traces her intriguing background.

You don’t get nominated for a Golden Globe award and make Time Magazine’s Time 100 list without an outstandingly accomplished acting career. That is exactly what the Creole American actress Kerry Washington has achieved.

Washington’s Mom is said to have sobbed when told by her daughter that she had decided to pursue an acting career. While some may find it surprising, this reaction it is just an indication of hard working parents’ desire that their children enjoy success in more conventional fields. As Washington explained in an interview with USA Today: “I think they’re the kind of parents who are interestingly more proud of the fact that I have an appointed position in the White House than they are of the show.” She was referring to the hit TV show Scandal, in which Washington plays a crisis management expert employed by the US President.

It is evident from Washington’s upbringing that her parents are no strangers to hard work and carving out professional success. Born in New York City’s Bronx district, her father was a real estate broker while her mother, clearly not the stay at home type, was herself a qualified Professor and consultant in the education sector. If Washington’s acting career had failed to take off, she had good grades to fall back on, having graduated Phi Beta Kappa in 1998, with a double major in anthropology and sociology.

Given her parents’ strong beliefs in a conventional career path, it took a certain amount of courage for Washington to pursue her dreams of being an actress. As with most aspiring stars of the silver and television screens – it didn’t come easily. So, where did Washington inherit her fearless and determined nature when it comes to her work? Of course, you need look no further than her parents.

Both faced the challenges that come with being from a minority background and trying to climb the professional ladder, and both rose to the top of their respective fields. Washington’s father is of African-American descent, while her mother is mixed race, being of English, Scottish and Native American extraction. Washington is also related to another Creole American who was able to represent the community with distinction – former US Secretary of State, Colin Powell. With all these strong and successful influences and role models in her upbringing, is it any wonder that she excelled in acting?

The long and winding road

Washington’s breakthrough came in 2000. She appeared in the hit teen drama, Save the Last Dance, along with Julia Stiles. She shone in her role as Chenille in a high school romance plot which was a hit with the younger crowd – nothing that could prepare viewers for the more serious roles she would play in the future.

On to 2003, and Washington starred in Bad Company, the action comedy thriller, as the love interest of actor Chris Rock. It was a film that represented the sign of the times – a plot centred around a terrorist attack on New York City – and one which gave Washington a chance to try her hand at another movie genre. She had truly arrived in Hollywood.

It was now time for a lead role, which came in the form of Spike Lee’s, She Hate Me. Washington plays the eyebrow raising character Fatima Goodrich, who asks her ex-fiancé for a sperm donation to mother a child with her lesbian partner. For a girl that had such a traditional upbringing, it is a testament to Washington’s abilities that she fitted into the role so seamlessly.

The rest of the decade would bring a series of hit film roles for Washington, including Mr and Mrs Smith, Little Man and I Think I Love My Wife. It also marked her first run of consistent appearances on our television sets, in Boston Legal, on ABC.

This was an actress with a serious work rate! And maybe the sheer volume of her output, as well as her obvious acting talents and beautiful looks, was an influencer as other opportunities started to come her way. Around this time, Washington was picked by L’Oréal to be one of the faces of their advertising campaigns for hair products. She was becoming a more familiar face to mainstream America.

Not just a Hollywood actress

It was in the next decade that revealed the incredible breadth of Washington’s ability. Having already conquered both Hollywood and the small screen, Washington showed even further that she is no one trick pony. She nailed her role as narrator for the TV documentary TBC Brass Band, From the Mouthpiece on Back. She also made her first appearance on Broadway in David Mamet’s production, Race, where she had familiar company in the form of James Spader, with whom she starred in Boston Legal.

Was there nothing that Washington couldn’t do? And where does she get the desire to keep pushing the boundaries? It’s clear she’s a very driven woman. One journalist recalled being invited to interview Washington during a Pilates session held at an impressively early 6.30am. It spoke volumes of Washington’s motivated nature, and something else, which Self.com scribe Molly Knight, spotted during the interview, and which also struck a chord.

While deep in the middle of Pilates, Knight noticed Washington had fixed her gaze at a spot on the wall where she had written a note. Looking more closely, Knight recalled the words were a quote by Gandhi: “Be truthful, gentle and fearless.” That reveals much about the way Washington approaches both her life and her career, and gives us an insight into why there never seems to been a bridge too far on her route to the top. Washington later told Knight: “I have to take care of myself to live life the way I want to. It’s important to have rest days. But overall, if I don’t work out for, like, three days, I feel worse, not better.”

Let’s pick up the story where we left it, with Washington on the cusp of landing the role which would see her progress from a well-known actress in the US and around the world, to a genuine household name. April 2012 heralded the arrival of Olivia Pope, the crisis manager that Washington would play in the smash hit ABC TV series, Scandal. The White House aide and former lawyer is known as a quick thinker with a unique way of talking that makes her ultimatums delivered to clients, legendary.

Pope is also a deeply interesting character, being able to hold together a high flying professional career as well as a notoriously unstable private life. As a happily married new mother, it is certain that Washington’s own life is very different from the character she plays so effortlessly!

So, that is the making of Kerry Washington, along with the powerful influences in her life. While Olivia Pope is one of the most complex and intriguing black lead female characters on TV, it is Washington herself that should provide the real-life inspiration to young Americans from minority backgrounds. Like Washington, in testing times they could do a lot worse than recall the words of Gandhi: “Be truthful, gentle and fearless.” 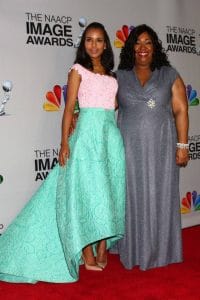