Until recently, Russellville – a tiny city in Alabama, two thirds of the size of Whitby – was best known for its annual watermelon festival. Now it can boast about being the birthplace of an intergalactic hero.

Sonequa Martin-Green left her Alabama hometown 10 years ago, to start an acting career in New York. After a few stage shows and a stand-out supporting role in The Good Wife, her breakthrough came with an audition for AMC’s zombie drama, The Walking Dead.

The showrunners initially turned her down, but soon realised they’d made a mistake, so wrote a new character specifically for her: gun-toting former firefighter Sasha. A fan favourite, Sasha’s gory death came just in time for Martin-Green to leap into the lead role of Netflix’s Star Trek: Discovery, bringing the franchise back to the small screen after a 12-year wait.

Her character, Michael Burnham, is far from the usual Star Trek protagonist. She’s not even a starship captain, but a disgraced ex-officer sentenced to life imprisonment for mutiny. A human raised by Vulcans, Burnham is outwardly cold and rational, but has a soft spot for the surreal dream-logic of Alice in Wonderland, reciting whole passages of the book to herself when anxious. She is also (huge spoiler alert) the adopted sister of Spock. She’s rather cool.

Sprawled in an armchair at a swish London hotel, Martin-Green, 32, is every bit as ebullient as Burnham is restrained. She speaks in long, lyrical chains of abstract nouns (“victory and defeat and love and pain and hatred”), makes sweeping gestures, laughs, does voices. When I mention her partner and Walking Dead co-star Kenric, she gasps; she is not just willing “to talk about my husband!” but actually sings those words, in a kind of rising scale.

For a Vulcan, any one of these things would be a terrible faux pas. For the new face of Star Trek, it’s all terribly charming.

Until you were 16, you wanted to be a psychologist. What made you change your mind?

I can pick the moment exactly. I had decided to be in a play because it wasn’t going to be shown to the school – so if it was bad, I wouldn’t be embarrassed. It was Christopher Durang’s play ‘Dentity Crisis. I auditioned and got the lead.

One day in rehearsal – I remember where I was sitting and everything, in the little auditorium in my high school theatre – it sort of came to me, it literally felt like it fell onto me from heaven: “This is what I’m supposed to do with my life, this is what makes my heart happy.” I ran home and said “I’m gonna be an actor!” to my mum and dad, and they were like… ooookay?

They didn’t take it well?

Did you grow up with Star Trek?

My parents used to watch it, so I remember distinctly seeing reruns of The Original Series, The Next Generation and also Deep Space Nine. But I never sat down on my own and really watched it. I just knew it was there; it was still (in a loving kind of way) part of my upbringing.

Why did it stand out for you at the time?

What struck me was the diversity, and the theme of true acceptance, realising that there really is no such thing as other – that you and I are really no different, because we’re both living and breathing. That was not lost on me. As a child, I knew that’s what Star Trek stood for.

Oddly, not everyone seems to have taken away the same message. When Discovery was first announced, there was a very ugly backlash about the casting from a small but vocal part of the fanbase. Why do you think that was?

A lot of people have been in denial, and have been resisting it. But the period we’re in is a period of awakening and enlightenment. It seems to be coming out of the woodwork now, but it was always there.

When we were introducing our show, I think we saw an example of that. Because some people who claim to love Star Trek say they were very upset by the diversity – and that’s completely antithetical to me. You cannot separate Star Trek from its legacy, from its universality, because that is what it is – it’s not even a part of it, that is Star Trek.

And so, these people who say that they love Star Trek “but, ugh, this diversity sucks” or whatever… I just I think it’s a testament to the blindness that’s plaguing us. It really is blindness; this inability to connect or empathise, this inability to see yourself in someone you perceive as different from you. That’s a hard thing to do. It’s uncomfortable, it’s inconvenient, and I think it can be even scary for some people to connect with someone different from themselves – but that’s what we have to do, and that’s what we strive to do in Star Trek.

We even have [Klingon leader] T’Kuvma say it to [albino Klingon] Voq, in episode one. He says, “I know some people see your skin as an abomination, but I see your skin as a mirror because I see myself in you.”

I just hope that people who had that [unempathetic] point of view would watch the show, and that they see themselves in it – because that’s what it’s all about. 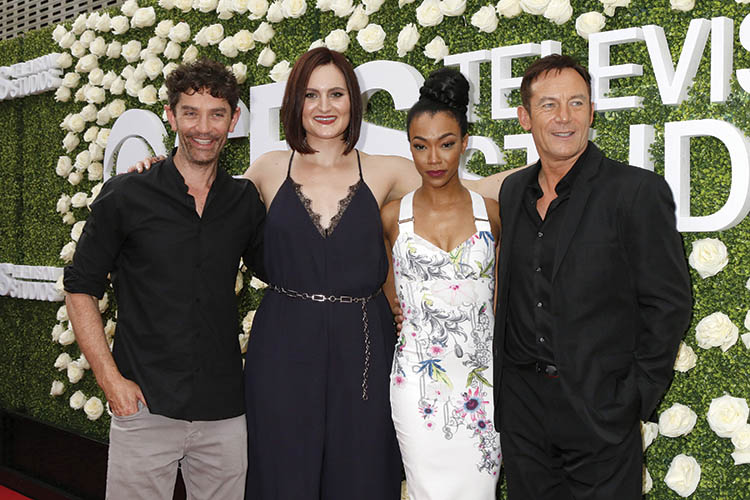 Michael Burnham is pretty handy with a phaser. Did you need special training?

You sort of just pick it up and point. I’ve had training with guns before, because I’ve used them a lot in different projects, so it’s similar – but the one thing you have to get used to is that there’s no kickback. When you’re shooting blanks, you sometimes have to pretend that the kickback is happening, but that isn’t the case with a phaser.

Is it fair to say Discovery is darker than previous Treks?

We consider the canon of Star Trek to be the central nervous system, our spine, but we’re still establishing our own identity. Our exploration is violent and it’s rugged, but it’s also kind. These things are in our story, like any other good story – these ideals, these major occurrences of victory and defeat and love and pain and hatred, intolerance, assimilation and acculturation and unity and community and all those things, you know? What separates us is that we’re exploring them in a deeper and hopefully a refreshing way.

A little while ago you ran into Nichelle Nichols, Uhura from The Original Series, and posed for a few photos together. What did you talk about?

We only met briefly, unfortunately. Hopefully, I shall get a chance to meet her again and spend some quality time with her! She graciously came to our premiere in LA, along with William Shatner. But she did say something to me, though. She said, “Enjoy this time, it’s yours now,” and I could’ve fallen over when she said that to me. I really believe that I’ve received her blessing, and that means a lot to me.

How was it working with Kenric on The Walking Dead?

It was amazing! Once I was already in the show, he had to audition for it five times, for five different parts. People might think that just because of me he got on the show, but no!

We only had one or two scenes where we were in the same space. But because he’s outlived me, I always say to him “You must avenge Sasha!” He goes, “Scott didn’t know Sasha…” And I’m like, “I don’t care if you didn’t know me – avenge me anyway!”

How much of yourself would you say there is in Michael? Do you see her personality as very different to yours?

Oh, very much so. We are two very different women, and I certainly didn’t pull it from my own life because that’s not what I do, I take the parameters of the story, and I allow my imagination to run free with it. There’s a couple of things, I guess – I like to think I’m tenacious like she is, and I hope that I can be as principled as Michael.

So, Spock is your surrogate brother. Discuss!

Yes! I knew that going into the series. I was very proud and delighted to be woven into that story. I love The Original Series – it’s my favourite, and I think [original Spock actor (Leonard Nimoy) was a complete genius. I think [Zachary] Quinto is brilliant as well, but what Nimoy did… it’s just so profound. When I was preparing as Michael Burnahm, I was creating my memories of this home I grew up in, so I looked to Nimoy – like, who is my brother? He made the biggest impact on me.

Would you get on with Spock in real life?

Oh goodness… I would try my hardest to get Spock to laugh, I think I would make that my mission. And I’d get him to give me a hug.