For over two decades Sean Perrodin has been sharing his passion for Creole cooking with Louisiana diners. It wasn’t until 2012 that he made it his mission to share Creole food and culture with the world, and has been working tirelessly ever since to make Southern Creole Foods a household name.

Sean Perrodin, founder and owner of Southern Creole Foods, is on a mission to expand the reach of Creole food and culture not only throughout America, but around the world. Having led his business from strength to strength over the past four years, Sean has already started to fill a gap in the commercial market for Creole foods and is taking it one step at a time to reach his goal of global expansion.

Inspired by generations of Creole cooking

It has been much longer than just four years that Sean has been in the food business. For more than two decades Sean has been working in a wide variety of establishments, from truck stops to fine dining restaurants, and tuning his culinary prowess, taking inspiration from his childhood and family history to produce award-winning Creole food. For him, cooking was always a fun, family-focused activity, where the men would cook what they caught and create delicious outdoor feasts for the whole family.

When Sean first went off to college, his intention was to become a pharmacist, but his love of food quickly took over and led him to focus on culinary arts instead. He created a Sunday tradition in which he would invite people on his college campus to his apartment for an authentic Creole lunch. What began with just 10 people visiting him to enjoy his food, quickly became 50 or 60 people all eager to sample his dishes. The tradition not only proved to him his culinary skill, but also the power that food can have. “Food brings everybody to the table,” he explains, “no matter what your differences are.”

After graduating, Sean delved into his ancestral history and found there was a rich past of food entrepreneurs in his family. In particular, he found an interview from 1978 in which his cousin presented a dish on television, and turned to the New Yorker (now the New York Times) to learn more about the relative’s style and passion for Creole food. It was at this point that Sean realised his love for Creole cooking ran deep within him:

“I’m not doing this just because. It’s a family connection somehow.”

The value of modern Creole food

Sean has won multiple awards over the course of his career, but one that has had the biggest impact on him was given to him in 1997 for his jambalaya dish. He was the first Creole chef to be given such an award, and Sean saw it as an incredible opportunity to display Creole food and culture to a wider audience.

Although he is first and foremost inspired by traditional Creole dishes, Sean isn’t afraid to adapt and refine classic recipes to cater to the more sophisticated palates of his modern audience. He uses traditional methods as the building blocks of his dishes, but adapts them to improve not only their flavour but their nutritional impact, too. Whereas in the past his dishes would be cooked with lots of margarine and unhealthy fats, now he turns to olive oil and real butter in order to incorporate healthier and tastier fats.

He also cuts down on salt and creates a better balance of herbs and spices to make dishes healthier and more packed full of flavour.

He is more careful in his choice of herbs and spices in order to improve the quality of his dishes, and is not afraid to experiment with new spices to amp up the flavour of his dishes and put a fresh, modern twist on traditional Creole food.

It wasn’t until 2012 that Sean founded Southern Creole Foods and began to put all of his energy into his mission to spread awareness of Creole culture outside of Louisiana. He wanted to be a gateway for inspiring Creole foods that aren’t available in a commercial arena. By making Creole foods more readily available, he is not only satisfying an existing demand, but also increasing awareness of Creole culture and in turn generating even more demand.he told us.

Sean sees Creole people as confident, aristocratic, community-focused, direct and welcoming. In creating food which mimics these qualities, Sean believes he can share the Creole culture with people all over the world. Right now, Southern Creole Foods is achieving this by being a manufacturer and a distributor, and having a restaurant called iCreole Bistro in which its foods are showcased. By inviting customers to come in and try the foods right away, they can help them to make a connection with the brand that will encourage them to go away and use the same foods in their home cooking.

Sean’s all-time favourite dish, smothered chicken in okra with shrimp and sausage, is the restaurant’s number one selling dish. “It’s the flavours, the textures, the aromatics… it’s been a very good childhood dish of mine.”

Most people who try it in the restaurant have never had it before, which goes to show just how loved these traditional Creole dishes are – all it takes is for people to have the opportunity to try them.

For Sean, that’s what Southern Creole Foods is all about, and why he believes it’s important that the brand has a wide range of products for people to try. Currently, there are 21 products in the range including seasonings, coffees, baked products, rice blends and many more to follow. The variety allows customers plenty of choice to figure out which product they want to try first as an introduction to the brand, and it means that there’s always plenty more for a customer to try when they come back for more.

Sean is clear that his ultimate mission for Southern Creole Foods is to become a household name, not only in Louisiana or the United States, but the whole world. There are, however, plenty of challenges along the way. It’s clear that there is a gap in the market for Creole foods, but there’s a need to constantly educate in order to help people understand what the brand is about, what they stand for, and what makes Creole food different to Cajun food, something which those unfamiliar with Creole food struggle to first understand.

“It’s a little frustrating because you have to constantly prove yourself,” Sean explains, but he’s also quick to say that these challenges are all part of the fun. “What’s been rewarding about it is seeing people buying off the shelves, seeing people email and request a product, seeing a person come in to eat and seeing that person in the restaurant three or four times that week – that’s rewarding. Because people do not come back for bad food.”
Above all else, it is Sean’s global aspirations which keep him going. “That’s what keeps me motivated; to one day see us as a household brand, globally, and then for us to give back to everybody that buys into us.”

He knows there’s a market there and by focusing on small batch production with high quality, Sean and Southern Creole Foods are making a slow yet steady impact on the market, expanding their reach day by day and month on month. Sean knows that by making local connections at home in Louisiana, the company will organically grow and that in time, international growth will happen. Sean is an inspirational chef and entrepreneur, and makes it clear above all else that his mission is not only to enjoy personal success, but to bring success to Creole culture. His closing message to Kreol Magazine readers perfectly summed up his ethos of showing by doing: “When I talk to some people about being Creole, they see it as a negative versus more of the positive. So be proud of who you are. Be able to educate and show your value to society versus being dictated what society thinks about you.”

This is exactly what Sean and Southern Creole Foods are doing – proving the value of Creole food and culture by sharing it with the world, one step at a time. 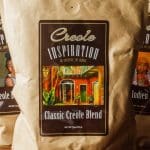 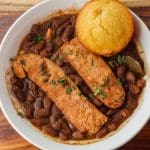