The Kreol Magazine Cook Off was keenly contested this year, but Team Gradney proved themselves more than worthy winners. Team boss, Angela, spoke to the ‘Sauce Boss’ Boobie, from Kreol Magazine, to explain the inspiration behind her dishes and divulge her interesting background.

How long have you been cooking?

I’ve been cooking since I was six years old. When I was six my Dad wanted to teach me how to cook something simple, which was rice on the stove. And if I didn’t cook that rice good, he would make me do another pot of rice. It had to come out perfect, so that was the dish I first really excelled in I would say.

Did your mother cook?

It was my Mum that did most of the cooking. My parents are both still very much alive today [laughs]. I’m 52 years old and have lived in Long Tail all my life.Coming from Long Tail Louisiana, what does the word Creole mean to you?It’s like a mixture of black, white, Indian, French – everything!

You look fairly fair skinned. Growing up within the Creole culture, was there ever a conflict when it came to skin colour?

I consider my race black, but there sure was! That went back to school, where they would call us yellow and all that. A lot of times it was used as an insult, but sometimes it wasn’t. They classed Mulatto as a person of light complexion. Really and truly you were black.

Where I was from, Mulatto was considered a low level insult. Did you have a preference when it came to claiming colour?

When I was interviewed by this magazine they asked me what Creole meant to me. I said it was the way I was raised, the music I listened to, the food I prepared, and kind of growing up in the culture.

Yes: the butchering of animals; calves and chicken. The gardening, the music that we play, that’s all part of our heritage as well.

The dish which you won the Cook Off with – what made you enter it?

The dish that I prepared was a crawfish fettuccine, and the reason I did that was because I knew a cook off, or a black pot cook off, would feature a lot of gravies. So I wanted to switch it up and do a pasta dish. I just really did it for fun, and the dishes that I did, they taste fabulous. I just wanted to do something different other than something with a gravy.

What influence did your team members have in reference to the cooking contest?

My brother Kevin set up everything and unloaded everything. My sister and Mom helped stir the pots and tasted everything to make sure it was seasoned well.

What made you passionate about cooking?

My Mom’s mother and father inspired me, my grandparents. I wish they were around to taste the dish. I was thinking about them when I was doing it.

How many children do you have and do they cook?

I have two girls, aged 24 and 28, and I started them cooking at an early age. They learnt from me and just took it away from there. They can make many dishes.

How many cooking contests have you participated in?

Have you ever cooked for a job, and what are some of your hobbies?

Oh no, I haven’t cooked for a living. I like camping, fishing and bicycling.

And finally, what did you win for first prize in the Cook Off?

I won a double burner stove, and man, we just love it! 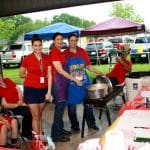