Omegan Jean-Marie Ciseau, representing Seychelles, became the new Miss Creole des îles International when she was awarded the coveted crown by the 2015 Creole queen, Debbie Horsman. Kreol Magazine joined the crowd of excited contestants, local celebrities and dignitaries, at the pageant in the International Conference Centre of Seychelles to soak up the atmosphere and also catch a few words with the winner and her two Princesses.

Think what you like about beauty pageants but there’s no denying the excitement this kind of event generates for everyone involved, not least of all the contestants and their families who come along to support them. And to put it in context, Miss Creole des îles International is more concerned with celebrating Creole culture than it is about focusing solely on the physical beauty of the contestants. Conceived originally by the founder of Telly’s Modelling Agency, Terry Carolla in 2015, the dream was to create a platform for young people to help promote Creole culture, folklore, dance, and food as well as give the event an international platform, especially in Creole-speaking countries. 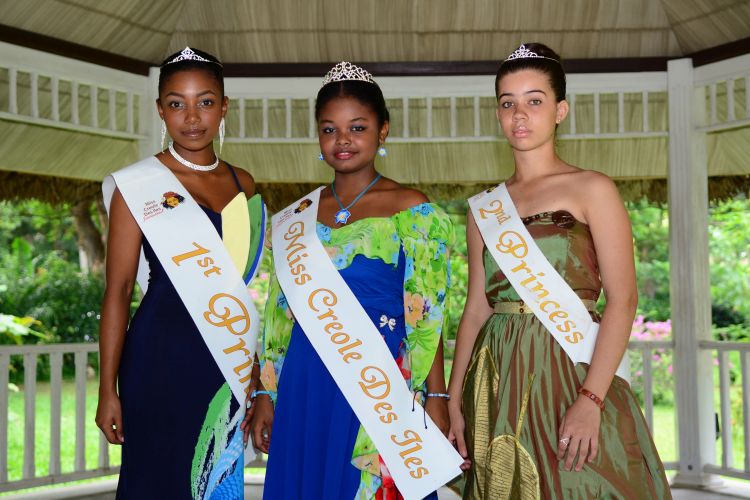 A tough choice for the judges

Open to young women aged 18 to 30, this year’s event achieved its target of attracting a maximum of 10 contestants. Apart from the crown itself which went to Omegan Jean-Marie Ciseau, other awards were handed out on the night. Romakira Gonthier won the People’s choice award and was also crowned first princess, while Ellissa Larue whose evening wear was judged as the best, was crowned as second princess. A panel of five judge, headed by Kevin Perine, had the difficult task of choosing a new Creole queen based on a set of criteria. The pageant got off to a rousing start with the 10 contestants dancing to the beats of traditional music, dressed in their blue and green outfits, which blended well with the stage décor. The judges and the audience also had the chance to see the 10 contestants parade on the catwalk in beach, casual and evening wear.

Stars and dignitaries support the pageant

After performances by top local stars Sandra, Smash Kid, Angie and Joenise Juliette, the master of ceremony for the night, well-known singer, DJ and radio presenter in Seychelles, Travis Julienne, announced the first winners of the pageant, He began by announcing the winner of the ‘Miss Personality’ title, which went to Melanie Sinon, while Kanisha Dogley won the Miss Photogenic title. The ten contestants, who were encouraged by a lively and enthusiastic crowd throughout were: Kanisha Dogley, Rania Bristol, Ellissa Larue, Romakira Gonthier, Chlorie Cadeau, Valentina Reginald, Omegan Jean-Marie Ciseau, Melanie Sinon, Angela Bill, and Isabelle Savy. Local dignitaries attending the pageant at the ICCS, included the Minister for Tourism and Culture, Alain St. Ange, principal secretary for culture Benjamine Rose, the elected representatives for Glacis, Regina Esparon, and Chantal Ghislain, the LP elected representative of the National Assembly.

The newly crowned Miss Creole, Omegan Jean-Marie Ciseau, was born and raised in La Misere where she lives with her parents and a sister and brother. Family is important to Omegan and when she’s not attending the Seychelles Business Studies Academy, where she’s studying for a diploma in accounting, she’s helping out at the family florist business, at the Seychelles bazaar. So while she is thrilled at winning the pageant, Omegan’s feet remain firmly on the ground. “Career is not more important to me than my family because without family you will never gain true success.” She is also quick to credit her family for their support before and during the pageant. “My family were always supportive and there for me, encouraging me at home and in the crowd on the night. They were my motivation and gave me hope to win. My brother told me I was going to win and that gave me the courage to enter and win the pageant!”

At first she was just relieved to be announced as one of the six finalists on the night and being crowned winner was a dream come true. Certain responsibilities come with the title, but winning has already taught Omegan some valuable lessons. “It doesn’t matter what age are you, what the colour of your skin is or even how much people know you – what matters is the time that you devote to embrace your culture in your everyday life and how much you cherish it.” Gracious in victory, Omegan paid tribute to her fellow contestants: “All the girls deserved as much as I did to have won the title, as each one of us had put as much effort into making this pageant successful and we are all beautiful young adults.”

First Princess Romakira Gonthier and second Princess Ellissa Larue, also saw the pageant as a great way to encourage young women in Seychelles to be proud of the their Creole identity and help promote the culture. The message was one that applied to the young men on the island as well, said Ellissa: “They can be proud of their traditions, be proud of the language and speak Creole, dress Creole, dance Creole!”