Here at Kreole, we’ve been fortunate enough to talk to Ioakeim Mitakos, who is living his lifelong dream of being a fashion designer. From an early age, growing up in a small village near Kavala, Greece, Ioakeim knew that he wanted to work in this exciting field. So, after graduating from the Faculty of Philosophy at the Aristotle University of Thessaloniki in Greek Language and Philology, he moved to Athens to study fashion design, patron and styling at the Veloudakis Fashion School.

An inspiration to other young designers, Ioakeim is proud of his Greek heritage and his current city of residence, Athens, as “modern, fashionable, with a sense of exaggeration.” Perhaps his best known work is his spring-summer Nuda Veritas collection, which was sufficiently impressive to earn him the Best New Designer Award at the Athens Xclusive Designers Week 2015 and Best New Designer through a competition run by Fashion Erotokritos – he classes these as his greatest accomplishments to date. He hopes one day to be a creative director for a famous brand, though in the meantime his current goal is to make his new atelier.

Working in his ideal job has brought him into a world filled with his idols, or at least the legacies of those idols. For instance, he names some of his favourite high-end fashion designers as Alexander McQueen, John Galliano, Karl Lagerfield, Antonio Berardi and Ricardo Tisci, while his favourite model with whom he has had the pleasure to work is Natasha Poly. The person who has most inspired him, though, is his friend, teacher and mentor, Ioannis Guia.

Rather than recruit them himself, Ioakeim uses a model agency to find the right models to wear his pieces: typically they wear their dark hair long and their tanned or olive skin looks amazing against the clean, white lines of his designs. He describes his personal style as being “simplicity, easiness, harmony,” while the style of his clothing line “consists of architectural structure, characterised by strong femininity, romance and energy.”

Having worked extensively in theatre and video creating costumes, Ioakeim has worked hard to get where he is today – he remembers that the first item of clothing that he was really proud to have created was a dress that was used in a production of musical theatre. So how do you get from designing costumes in theatres to creating collections for the catwalk in international competitions? 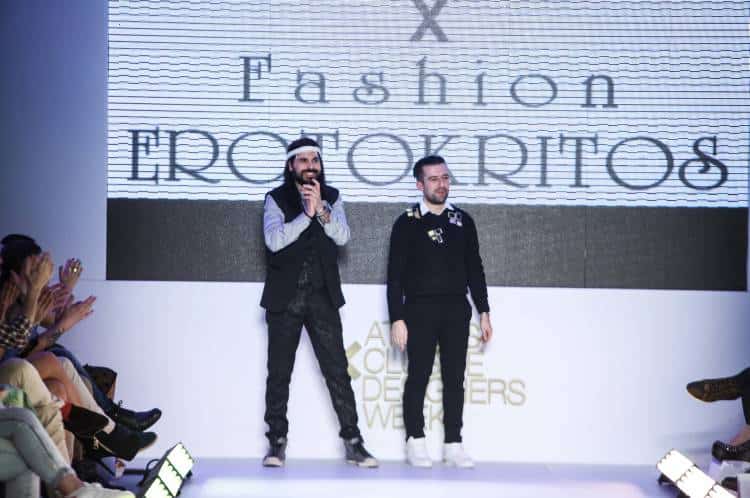 Ioakeim tells us that he usually takes just a day or two to make a first sample when constructing a new piece (depending on how demanding the job is), but to get to that point he first has to gather information about the theme of the intended collection. Then he spends time really thinking about what he wants the collection to convey and designs the mood board as a starting point. Putting his thoughts on to paper in the form of sketches of “random designs” is by far his favourite part of the design process.

He then collects the right materials for the job he has in mind: he supports his local economy by buying his fabric from local shops in the centre of Athens. “Then I focus on the designs and re-filter them until I end up with the desirable number of designs.” Sometimes it takes time to conceptualise a design, though sometimes “it just happens” – his record time for finishing a design is just 15 minutes!

It’s very much a creative process throughout but it takes considerable focus and knowledge of fabrics and their construction to produce a collection that flows with pieces that work well together, yet are all distinct and beautifully made. Indeed, although it can be a lengthy process from idea to catwalk, Ioakeim is one of the lucky few who adore their job: we asked for three words to sum up ‘fashion’ and he replied, “passion, expression, love.”

That passion and love extends to choosing the right fabric for his designs – he firmly believes that the high quality of the materials and of the seams are the keys to making a really special piece of clothing, but he also watches and controls each and every step of the creation of the cloth he uses. For all that technical know-how and experience, though, Ioakeim is certain that he is an artist rather than an inventor: “I express my inner self through my designs.” It is therefore perhaps unsurprising that the part of designing clothes that he dislikes is having to design something that doesn’t truly express who he really is.

If you love Iaokeim’s designs and want to own a piece of design history in the making, you can order and then buy his designs at any atelier that hosts his collections. And if you are a budding fashion designer yourself, Ioakeim believes that you will need the skills of imagination, perseverance, organisation and boldness – and he has the following advice: “Follow your dreams.” It worked for him!