Background: The Birth of a Dream

Ernest Hilaire grew up in St. Lucia in an environment that encouraged a strong social consciousness. Organised youth groups, sporting competitions and the local student and youth movements were a normal part of his upbringing that fed his natural fascination in sociology. An early interest in current affairs made it easy for the youngster to memorise the capitals, populations and flags of many countries and learn about international history.

In the early 1990s Hilaire completed his Bachelor of Science degree at the Cave Hill campus of the University of the West Indies, after switching from a strict Sociology major to a double major in Political Science and Sociology. Hilaire’s aspiration to become involved in international politics and help address and provide solutions to global problems sprang from the same fertile ideological soil that would motivate him to join the Foreign Service upon his graduation in 1993.

Foreign Service and Beyond

After serving one year as a Foreign Service cadet, Hilaire earned his Master of Philosophy degree in 1995, with a distinction in International Relations, from Darwin College, Cambridge University, England. He then decided to spend the next two years teaching. While in the teaching post, Hilaire was invited, by Prime Minister Dr. Kenny Anthony, to serve as his personal assistant. He worked in this capacity for two years, a time he fondly recalls as “a very rich period in my growth and development”.
Hilaire’s time in the Prime Minister’s office brought rewarding work in government programmes that focused on basic needs, internships and national skills; a micro-enterprise fund for young people. This included a government initiative designed to improve the living standards of banana growers, who faced tremendous pressures due to the declining rural landscape.
In 1997, Hilaire served as Permanent Secretary in charge of the Ministry of Youth and Sports. At that time, the St. Lucian government had plans to build a National Stadium, the national cricket grounds, and determined to place courts all over the island. Innovative sports and youth policies were required, and Hilaire was appointed to oversee the government’s youth and sports programme.

From Sports to Business and Back

Hilaire then returned to England to earn his Ph.D. at the London School of Economics. Before leaving St. Lucia for his studies, he helped prepare the bid for his home country to host the Cricket World Cup. As a result, St. Lucia received one of the most attractive Cricket World Cup packages. After completing his degree, Hilaire returned home to serve as CEO of the Cricket World Cup Tournament in St. Lucia.
His career then took him for a time to the world-renowned business consultancy, McKinsey and Company-an opportunity he describes as “probably the most fascinating experience in the life of a young professional”. At the consultancy, he adds, “I met some of the brightest and most efficient people I have ever known in the world”.
In 2010 Hilaire was invited by the West Indies Cricket Board (WICB) to serve as Director of the 2010 World Tournament, which the board would be hosting. While Hilaire made preparations for the tournament, the board made a decision to replace its CEO and suggested that Hilaire apply for the soon-to-be-vacant post, stating that the WICB needed someone who could “transform” the board. Hilaire applied, was hired and held the post for three years before deciding that the time had come to move on to fresh challenges.

On hearing that Hilaire was prepared to leave the WICB, the Prime Minister asked if he thought he might consider a diplomatic position. Learning that the post would be based in London, Hilaire quickly accepted.
When asked today whether he misses the hands-on approach of his government post, Ambassador Hilaire responds candidly:
“I miss it and I will always miss it. I know I will go back to it. It’s what makes me feel most fulfilled. But I believe doing this job is important. With some huge responsibilities on your shoulders, it helps you to develop certain skills and certain competencies which I think are necessary … as a professional. But I know I will go back to doing what I love most: working with the people in the communities. Just the sight of young people being unemployed, not having the opportunities to be gainfully engaged in productive activity, is something that will always motivate and inspire me to be involved in these programmes”.
For that precise reason, Hilaire is today, as he was in the past, still involved with the National Youth Council of St. Lucia. Although he may no longer be on the frontline of social development work back home, he stays in touch and does his bit to help. Part of this support involves cultural work – encouraging young people to use their talents in music, dance, filmmaking and art. He is also working with a Saint Lucian who plays football in the UK to create a football academy and build a home for disadvantaged youth.

Hilaire counts Carnival, Calypso, and Reggae among his favourite cultural and personal interests. “I grew up with Bob Marley being the favourite musician. For me (Reggae) is the most relaxing and inspirational music because the messages it conveys reach me in a way that keeps me grounded… I listen to other music, but… Reggae and Calypso are my favourites”.
In tying his favourite music to his cultural identity and social sensibilities, Hilaire clarifies his outlook: “As a West Indian, the beat is important. The Rhythm of our life is reflected in the beat of our music. But, I will not listen to songs where the lyrics are unacceptable. There has to be a message”.
To his belief that “there is a deeper meaning beyond the everyday living of Creoleness”, Hilaire adds these thoughts: “For me, Creole is really the blending of various races or ethnic backgrounds, in the West Indies in particular. We have become a melting pot. There is a vibrant Creoleness about us Caribbean people. We have become indigenised and that indigenisation is our Creoleness. That’s what makes Saint Lucia so fascinating because we have a very strong French influence on top of an English structure. (With) our Creole language you will get African words, French words, but we also speak English as our official language. That kind of blending is the Creoleness we see in our people. It defines us in a way which… tells a lot about the vibrancy we have as a people. For me, it’s just exciting”.

As High Commissioner, Dr. Hilaire describes his diplomatic role as defending the interests of Saint Lucia in the United Kingdom and representing the interests of the island’s member organisations, as well as those of the large St. Lucian Diaspora in the U.K. He views these functions as “expanding the space where St. Lucians can benefit from building relationships and contacts”.
Today, nearly 20 years after joining the Foreign Service as a cadet, His Excellency, Dr. Ernest Hilaire has come full-circle. He embraces the office of High Commissioner-and all its challenges-with a passionate determination to use his rich social and political background and wealth of skills and education for the noble purpose of working in the diplomatic arena, on behalf of his country and for the people he loves. 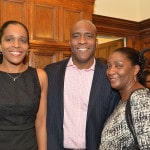