Salma Hayek talks about violence against women, the gender gap in Hollywood and what she does to support change. A must read interview with a very strong female!

Movie stars like Jennifer Lawrence and Patricia Arquette declared war against Hollywood because of the lower salaries women receive compared to men. In your case… When did you realize, that as a female, you weren’t being treated equal to a man?

From the beginning, because just imagine, I came not only as a woman to Hollywood, but as a Mexican-Arab. This was 26 years ago, where people would laugh at me for having the dream of being able to work in Hollywood.

Who discriminates the most? The producers in Hollywood?

Everybody, in the acting school. I went to the Stella acting conservatory of drama. I was the only Mexican that was trying to go into work, except for Benicio del Toro, who is Puerto Rican, so he’s kind-of American and he’s a male, and nobody laughed at him. Me, they were laughing at me also in Mexico for the idea of me, Salma, trying to break into that market. Every single agent I was trying to get, the studios, every single person, it was a laughable concept.

What about in France?

Yes, it’s much better. 30-40% of movies are made by women. However, in the 70 years of Cannes, before Sofia Coppola, it only had one female that has been awarded the coveted Palm d’Ore and she got half of the Palm d’Ore, because she had to share it with Chinese men.

In the United States, 7% of movies are directed by women and that number goes even lower when you look at blockbusters.

I was going to say, “They’re all small budgets.”

Why do you think that is?

I think it’s ignorance. Overall, if I had to summarize this, it’s ignorance. They had not realized by now, we, women, are a great economic power and these people don’t understand that there’s a huge audience. We’ve been neglected for so long, they don’t even know what we want to watch. By the way, we don’t even know what we want to watch because there’s not been a lot. We always think of the other people we are watching the movie with. We always think of the other one first. Your family, the husband, the boyfriend, the girlfriend. I think it’s that Hollywood is not going to change, to treat women as equals. It’s business, but even the good guys are ignorant in the way that they have not capitalized on the female audience potential.. They are undermining us as an economic force, when, today, almost 80% of the decision makers of what movie to watch is a female. We are the ones who decide what to do with the money, what to pay. Now, women, we are independent, we all work, we all make money. We want to go out and have fun much more than before, and we are the greatest consumers in not only film but for fun, for everything, and they have not capitalized on that. It’s ignorance.

Do you feel executives are listening to these requests?

Yes, the executives are listening, like they’re always listening… to the money. They always listen to the money. They are very interested in this. I think they are beginning to realize and now they are in a panic. “There are no females. There’s not that many!” No, because you have not supported the industry and they are now desperate. They have not been trained. Now they’re desperate to find. They are still a little bit lost. They don’t know exactly what or how to get to them, but now they are desperate.

Antonio Banderas and Salma Hayek arriving at the “Puss In Boots” Premiere at the Ritz Hotel Moscow on July 16, 2011 in Moscow, Russia. Photo: magicinfoto

Maybe, I think the roles are going to take a little longer, because this is very recent, but yet, it has changed for everybody. I do think they are more open to listen when you have a project. They are actually hoping that you are a good director. I do think it has changed, but we’re still very far away from the ideal. I’ve also have noticed that in Cannes, there were more female directors, in the last couple of years, in the various categories.

If there was a film entirely made and directed by women in which you were approached to star, would you do that?

Do you think that Hollywood ignores certain women stories in our world, like the real violence against women, for example?

I think that one of the biggest problems is that sometimes, when violence goes on for a long time, it becomes accepted as normality. Culturally, there’s always violence in different ways or forms but people don’t see it happening. A lot of us think of places where it’s very obvious that women are going through very violent situations and it’s in another country.

It’s far away, but then, for so many years, it wasn’t talked about. We make less money, even if we have the same qualifications. On many occasions, even with more qualifications than a man, but they don’t even think of this as violence, because it’s the norm. I think it’s very important that we, are talking about it, now, because it brings alive the possibility of changing the accepted status quo.

Hollywood avoids that kind of reality, so do you think that they should film more real stories about it?

It takes a lot of courage to speak. We are very far from that, because there’s a cynicism. I was talking about the normality… I remember I was working in Latin America with prostitutes at some point to try to train them to educate men to wear condoms. It was an extremely successful campaign. Nobody has been more successful than the prostitutes teaching men what to do and how to protect their families, and themselves. They said they could get anyone to do it, except the police who rape them constantly, for free. A lot of times, it happens with women that are raped by their husbands. It’s not that easy, because they don’t have a bruise and they are being constantly abused at home, but they cannot say sexual violence because he’s the husband. He has the right, in a way, to rape. It’s very hard for a woman and you see it now in the colleges. For them to come out and to prove that they didn’t do it willingly, it’s very very difficult. Sometimes, it takes them a couple of days to recover from the drama and to be able to want to speak, but now you can’t have the proof.

At the time of the Sundance Film Festival, there was a Women’s March in Washington as a protest against the President of United States. Do you think that there is a different awareness than there was even a few years ago?

I think that it is creating a division. I think it’s creating one part being more aware and more proactive and yet the other part still voted for Trump even after everything that he said and how obvious that he is sexist. I think this is very positive, because we’re getting a clear view of what’s really happening in society. Maybe it was not clear that the other ones were so sexist. Now, it’s becoming more clear and there’s a division, which I think is positive because then it starts the conversation. It’s out. We know now. In America, for example, we know that racism is very strong. We know the sexism is very strong. Before, it was “America, the land of the free.” Now it’s very clear, and it’s starting the conversation in other countries. We just had the election in France. It was close. The division is making clear what is happening. I really think we are beginning to come out the dark and starting to really identify what is happening and this is positive.

In your case, have you found a better role for women, for example the Kering Foundation, which during the Cannes Film Festival, made awards only to women?

The Kering Foundation is about to have its 10th birthday. We focus on violence against women and we do it in four ways: First, of course, we support and fund organizations that have grassroots and local infrastructure and are combating violence against women. I am very proud of this. The second part is analyzing itself and finding out how internally it can support equality for women. I am very proud, because it is one of the companies in the world that has the most number of female executives and it’s 50/50. I think it is the first one that has had training for the workers in how to identify domestic violence, how to help them. It’s a lot more common than you think. The third part is raising awareness. We have the wide ribbon campaign. We started this almost from the beginning. Via stores we distribute more than 230,000 badges and stickers to maintain the campaign to stop violence against women. The people that work in the stores are so proud to do this. Then, digitally, this year, we reached more than one billion people through the White Ribbon campaign. It was designed by Stella McCartney. The last part is directing to get other people involved in the movement, from all around the world. 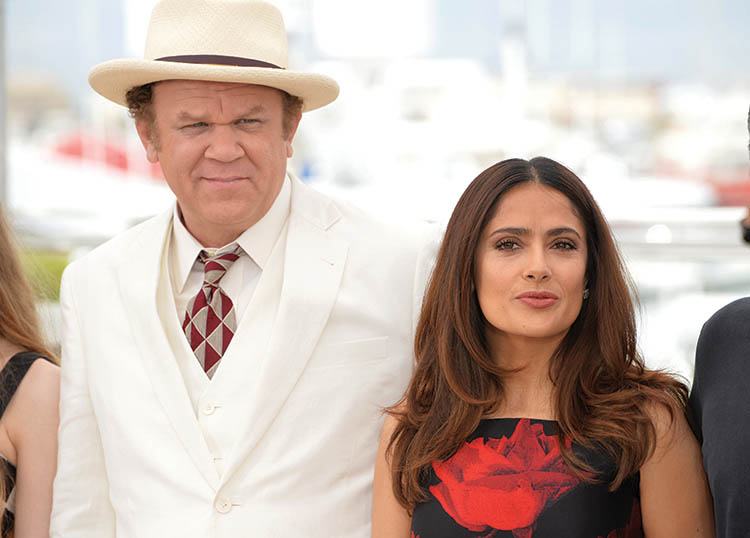 What about the movie world?

We do that, but with another section of the organization. Our main focus is not film, but we support films that talk about the subject matter in the Kering Foundation. Also with Gucci and the Tribeca Film Festival we’ve been supporting documentaries and short films and women film making for many years. I have “The Time For Change” where we also do that. With the Kering Foundation, we support struggling filmmakers, we help bring it out. Even from the beginning, the first year, we had a board member who directed ’Desert Flower’ which is about female genital mutilation. We do one at least every year. In the Kering, we don’t give money for them to do the actual film, but we do it through funds to support in other ways. Through Sundance, we also sponsor a couple of people to do specific workshops. We do not just do films, but also award scholarships. All this is through Sundance.

Who inspired you to become an actress? What artist from Mexico inspired or influenced you that translated into your work and style on screen?

It was not an actor. It was concept. When I was little I saw a movie called ’Willie Wonka and the Chocolate Factory’. When I was watching this film, something in my head went, “There is a universe where everything is possible. There’s no limits and there are rivers of chocolate. Everything is possible,” and I fell in love with that. I was very young. It was not to be an actress; it was the love for cinema. I thought, in my limited experience and ignorance at the time, how do you get in? I guess I have to be an actress, because the thought of maybe making the movie, was so impossible you wouldn’t even have the courage to dream it, so I guess an actress it is. I love everything about cinema, including acting. It’s my first love.