Denise Boutte has journeyed a long and winding road to Hollywood, dabbling in being a doctor, a marketing specialist and model. But now she has hit the big time, an actress – who starred in films such as ‘Why Did I Get Married?’, as well as shows such as, “Meet the Browns”, “Everybody Hates Chris” and “Days of Our Lives” – is determined not to forget where she started, as regular trips back to her home state demonstrate. Kreol Magazine caught up with her to talk about life, work, family and food!

If taking the best of the old, and mixing it with the new, is the best policy for those moving away from their traditional surroundings, then it appears Denise Boutte is setting a good example. The actress is a native of the village of Maurice in Vermilion Parish, South West Louisiana, but has since moved to California with her young family, as she pursues, and lives out, her dream of working in Hollywood.

Denise’s Louisiana roots, mixed with her new cosmopolitan sensibilities, are perhaps best illustrated by her take on food – cooking which combines traditional creole fayre with fresh twists. She describes cooking as, “More than just a passion”, and uses it to relax. A new dish she is fond of is a savoury take on the old soul food favourite – sweet potato.

She ate sweet potatoes with “nearly every meal” as a kid.

Sweet potatoes are such a nostalgic ingredient for me. I remember folks driving for miles, just to purchase crates of Paw Paw’s Sweet Potatoes, notorious for being the best and sweetest in South Louisiana. 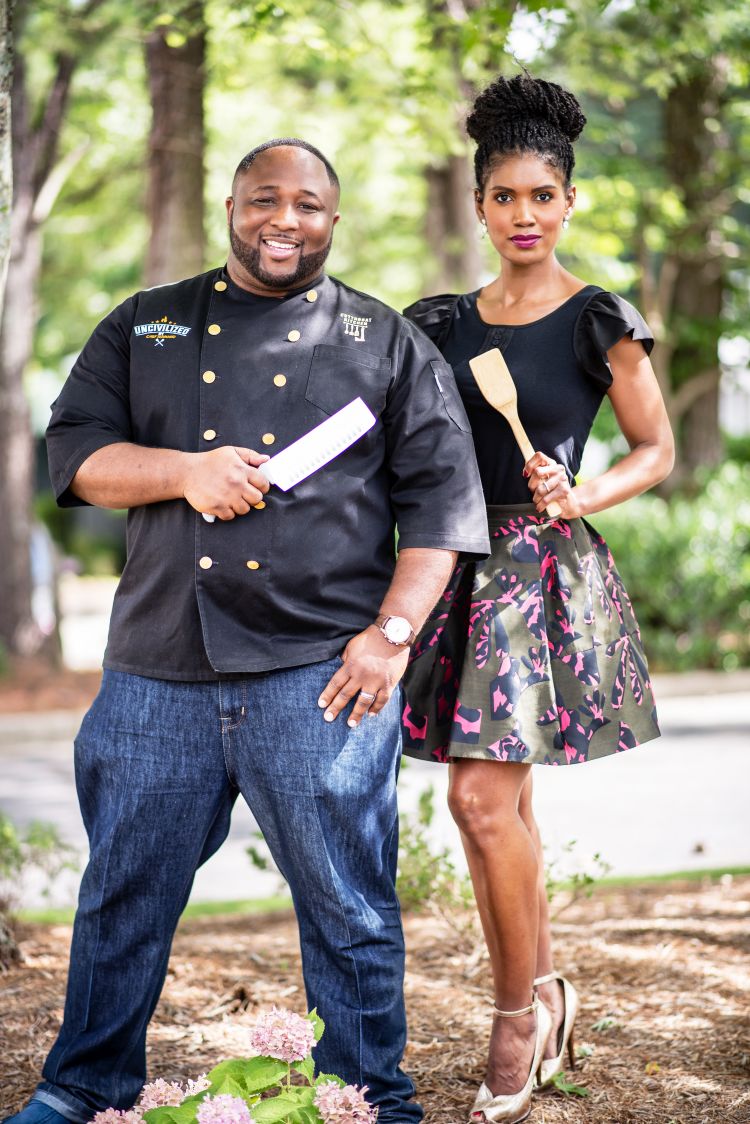 Into the Hollywood set: a chance opportunity

It was a big role in the movie ‘Why Did I Get Married?’, followed by a part as Sasha Brown in the ‘Meet the Browns’ sitcom, which has now been syndicated for the mass market, that gave Denise her first big breaks. But from speaking to her, you get the sense that she still feels fortunate to have landed the roles she has. It hints at the near impregnable world of Hollywood, where ‘who you know’ can often be more important than acting skills themselves.

Denise says of the Hollywood mindset: “There’s a fair amount of content, but when the decision-makers continue to fill with the same names/faces because the business side of things requires it for box-office draw, they shut out an entire group of talented artists. You miss out on the opportunity to cultivate the next generation of storytellers.”

It appears that, although she possesses a great deal of talent, her modesty meant that Denise might not have ended up in Hollywood had it not been for a certain turn of events. Only a few years ago, it was her job to oversee photo and film shoots as an advertising executive, in Dallas, Texas. One thing led to another, and before she knew it Denise was appearing in front of the camera, rather than behind it – then one meeting changed everything.

I found myself in front of the lens for a variety of print and commercial campaigns. A chance introduction landed me a talent manager (who I’m still with, till this day) in Hollywood and shortly after, I decided to take a leap of faith, packed my bags and headed West. Trust me… No one’s more surprised by my career choice than me! It’s been quite the journey, thus far, and trust me when I say I’m just getting started!

Never allow myself to miss home

You might think that with so much on her plate, Denise would occasionally struggle to make it back to her home state – think again. This is an individual who seems to be energised by her visits back down South, and as she explains, neglecting her soirees at home is not an option.

“We come home a lot! With the majority of our family still there, we do our best to not give ourselves time to miss it. We’ve been very blessed to return home every Christmas and New Year. The hubby and now baby girl never miss Mardi Gras nor the weeks leading up to it, making sure they can ‘put in work’ on the costume front. Since top of this year alone, we’ve trekked it back home five times and counting.”

A Creole to the core

So while she is a proud Louisianan, how about the creole element of Denise’s identity? Well, it certainly seems that it is in no danger of fading away, especially as she is now quizzed more than ever about her racial origins, since moving from the Boot State to the Golden State.

She explains: “It wasn’t until I moved to California that folks began to frequently ask if I was everything from Ethiopian to Trinidadian to Barbadian. Flattered, of course, once I proudly yet simply answer with “I’m from Louisiana,” they seem to immediately ‘get it’.”

Denise cites one of her “biggest regrets” as not learning Creole, but there might still be time, and she seems determined that her daughter grows up with a feeling for that wonderfully diverse language, rich with so many influences. She says of the “beautiful language”: “I’m familiar with words and phrases, but my parents, grandparents, aunts, uncles, you name it, were fluent and spoke Creole French, quite often. By not teaching the language to the younger generation, adults could have private conversations in the presence of kids. I vividly remember my Paw Paw Joe on the front porch, playing Zydeco music on his accordion, singing mostly in Creole. Still makes me smile. To right that regret, I’ve ordered Creole flash cards from my cousin, an amazingly insightful Creole historian and advocate. Any time my daughter is spending extended time with her Mon Mon (my Mom) I make sure to carve out flash card time, so that she can teach baby girl the words and proper way to annunciate. Have to keep the tradition alive!” 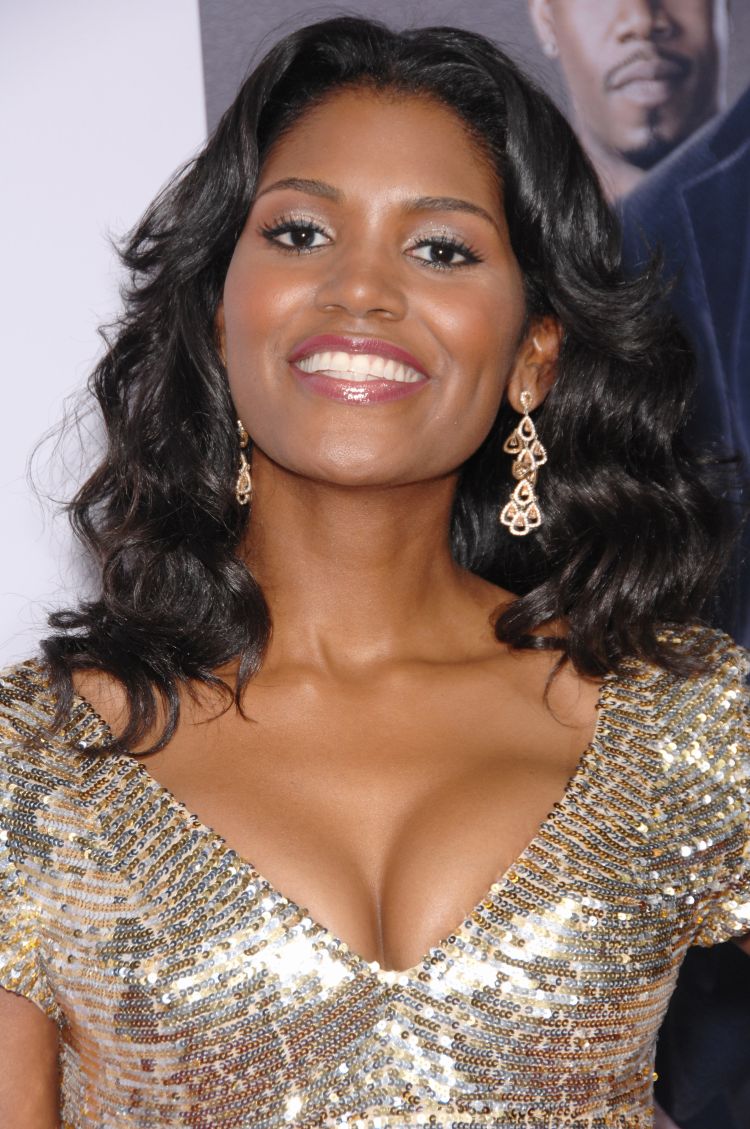 Denise Boutte at the world premiere of her new movie “Why Did I Get Married?” Los Angeles, CA Photo: Paul Smith / Featureflash

Back to California, and it looks as though Denise has decided to take things under her own control a little more, starting her own production company – ‘Imagine That Productions’ – which will allow her to focus more on her specific interests. And that includes cooking! She will continue to concentrate on the healthy or modern spin on traditional southern dishes; it’s a concept which appears to tie in with Denise’s personality, as well as her culinary preferences.

She runs us through the mouthwatering menu of projects she has on the agenda, and it is almost a miracle she has any time to cook at all!

For me, diversification is key. In addition to producing my own Film and Television concepts, I’m in the thick of creating a culinary empire! From my ‘Weeziana Girl All-Purpose Seasoning’ (currently available for purchase online at www.denisejboutte.com) to Heat-&-Eat entrees, there’s a slew of ventures on deck. This Fall is going to be a busy one… I’m currently in ATL shooting season 2 of IFC series, “Stan Against Evil” alongside the likes of Dana Gould, John C. McGinley, Janet Varney and have a cookbook, only months away from hitting store shelves, right in time for Holiday gift giving!

All that is in addition to a project she has undertaken alongside Chef Jernard Wells (who appeared on the ‘Next Food Network Star’ show) – a new cookbook called ‘Southern Modified’. Wells is from Mississippi, and Denise was happy to ‘cross the border’ to form the partnership.  The pair will focus on taking Southern-inspired dishes and modifying them for today’s healthier lifestyle.

The Boutte household certainly seems like a good place to eat, and Denise relishes in reeling off the list of dishes which regularly make it onto the family dining table: “Seafood Stuffed Catfish, Pecan Pralines, Bread Pudding, Spinach Stuffed Tomatoes, Asparagus Pasta, Cornbread Casserole” are all creations which you might see make it into one of her forthcoming cookery projects.

Giving back to her community

Denise comes across as a well-rounded, endlessly interesting, and creative individual – an example for young people. So, it is a positive that she has chosen to provide students at Southern University in Baton Rouge the benefit of her experience, after being invited to speak by her friend Jonas Vanderbilt, the choreographer. She is determined to give back to her home state, which it is obvious has armed her with so much natural confidence and effervescence, characteristics which have undoubtedly underpinned a blossoming acting career.

So, let’s try and tap into the charm and work ethic which have made Denise Boutte a success. What advice does she have for Kreol Magazine readers which they can take on board in their own lives?

We will leave you with these final thoughts from the lady herself, who places a lot of importance on: “Surrounding yourself with a trustworthy team/village that truthfully tells you, not necessarily what you want, but rather need to hear”.

“Diversify, persevere with convictions and stay the course… Your course!”