Liverpool was responsible for 80% of all British voyages in the final decade of the slave trade before abolition in 1807, leading to a public apology from Liverpool City Council in 1999 for the port’s role in human trafficking. Today, Liverpool Slavery Museum serves as a permanent reminder of a shocking industry that saw millions of African people kidnapped from their homes and enslaved over four centuries.

Slavery is estimated to account for the forced removal of up to 25 million people from Africa from the mid-15th century, when ships from Portugal first reached the continent and began to enslave people, until the early 19th century.

Liverpool was once known as the European capital of the transatlantic slave trade, with its ships transporting a staggering 1.5 million Africans into a life of slavery, despite the port not being involved in the trade in the early days.

In England, merchants from Bristol and London were among the first to begin human trafficking, in the mid to late 1600s. Liverpool became involved in the early 18th century, sending 77 ships to Africa by 1725, compared with almost 400 ships from Bristol and nearly 700 from London.

However, by the 1740s, Liverpool had overtaken the other English ports in terms of the number of ships sent out to Africa to transport slaves. By 1750, Liverpool was sending more slave ships than Bristol and London combined. In the final decade before abolition in 1807, 80% of all British voyages and 40% of European voyages set sail from Liverpool. 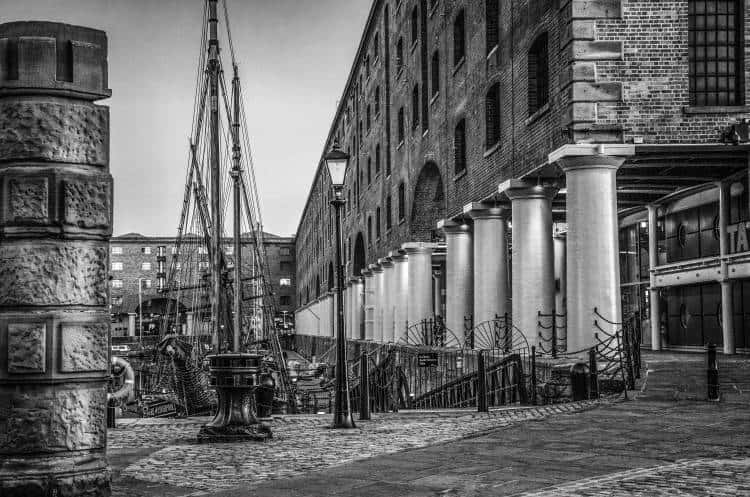 A large number of documents have survived, dating from the 1700s until British abolition in 1807. These detail the operation of the slave trade through account books and letters from ships’ captains, owners, agents and suppliers.

The port of Liverpool had easy access routes in the shape of rivers and canals that led to its prosperous trade in goods such as guns, cloth and iron. The local merchants were known to be particularly sharp and skilled in undercutting their rivals, reducing turnaround times and orchestrating increasingly flexible operations.

When they began trading in people, they developed close relationships with African merchants. It was an expensive and complex business preparing for a slave voyage, costing £10,000 in the 1790s, – around £550,000 today. The vessels were laden with goods specifically chosen to appeal to African traders.

Each ship would be fitted out by a single merchant, funded by a consortium of owners, which included fellow merchants, politicians, bankers, wealthy landowners and other investors. Even investors of more modest means could buy a small share.

Even though the proceeds were high, the investors often made a profit of only around 10% after it had been offset by the costs. Some investors, however, saw higher returns on a particularly profitable trip. The Enterprise made a voyage in 1794, when 356 Africans were captured and sold into slavery.

The proceeds of the sale were £22,000 and, after paying agents’ fees, the crew’s wages and other costs, there was still a profit of almost £10,000 for the investors, equating to around half a million pounds today, leaving them very wealthy men. The Enterprise was finally shipwrecked in 1803 at Mew Island, in the Belfast Lough in the Northern Ireland coastline.

The trade was conducted at various forts, usually run by Europeans on the African coast, with goods used to buy enslaved Africans. Two of the main forts were on the West African island of Gorée, south of Cape Verde.

Today, there’s still a stretch of road in Liverpool called Gorée, stretching between the Port of Liverpool building and Fourth Grace.

Captains who didn’t use the official trading forts negotiated directly with African traders, paying customs and dues for their trading rights.

One ship frequently used was the Essex, managed by William Davenport, one of seven investors. Davenport was one of the major slave merchants in Liverpool, organising around 140 voyages over four decades. The shared investment in a voyage was a popular one for merchants who traded abroad, due to the risks involved.

If a ship was lost, but there were several investors, they could cope with the financial loss. Although the profit must be shared too, the businessmen preferred to jointly invest in several voyages, rather than investing every penny solely in one ship. The number of investors was normally six or seven, although there could be as many as 60 with a stake in any one voyage.

Landing of 20 African captives at Jamestown from Dutch man-of-war, 1619. In the early colonial era, Africans in Virginia were called servants, and worked alongside white indentured servants. 1619.

Preparing for a voyage

In the weeks prior to a voyage of the Essex, Davenport would gather his cargo of goods to trade. The main goods were usually textiles, gathered from Manchester and from Lancashire towns. In addition, more exotic textiles from India, such as chintzes and silks, were traded.

Other items traded included beads that Davenport imported from Italy, Prague and Silesia in Germany. He worked closely with Thomas and William Earle, owners of a local firm that traded iron, wine and oil and who owned sugar plantations in British Guiana.

Another popular trade item was alcohol, especially brandy from local distilleries, or rum imported from the West Indies.

Liverpool was in an ideal place geographically to obtain imported goods, usually through the Mersey and Weaver rivers, the Sankey Canal, the Leeds-Liverpool Canal and the Trent. This was one of the reasons Liverpool merchants could establish a successful slave trade with Africa.

The crew members were gathered at the same time as the cargo. The outcome and profitability of each voyage depended on the skills of the ship’s captain, whose average age was 30.

The captain had a hand-picked crew, including the chief mate, second mate and even third and fourth mates. Most ships also had a surgeon and an assistant to look after the captured African people. The Dolben Act of 1788 made it a legal requirement to have a surgeon on board.

Other crew members included a carpenter to build accommodation in the holds on the way to Africa for the enslaved people. There was often an armourer, responsible for all the weapons on board. The remainder of the crew included a steward, a cook and a cooper (barrel-maker). Boys, who were often making their first voyage, completed the crew.

Once the trading in Africa had been completed, seizure by privateers was a real threat. Armed ships, owned and crewed by private individuals with a government commission, were authorised for use in war, including the capture of merchant ships.

In stark contrast to the wealthy ship owners and investors, the enslaved people led a life of misery. It was an arduous and horrific journey, with a lack of sanitation and cramped conditions without fresh air, leading to a constant threat of disease. Outbreaks of smallpox, fever and dysentery quickly turned into epidemics as the captives endured the harsh conditions for at least two months.

Fed only on basic food such as thin soup or gruel, many died on the voyage. One-fifth of all slaves died on the Atlantic crossing, while 40% of those who survived the journey died during their first year in captivity. Many slaves died in their 30s, never fully recovering from the horrors that had been inflicted on them.

The captive men, women and children were shackled together and transported to the cotton, sugar cane and tobacco plantations in America and the West Indies. The ships brought back produce from the plantations to Liverpool, where it was sold and transported across Britain and to its expanding British Empire overseas.

This was known as the triangular trade, a system of trading whereby a country pays for its imports from one country through its exports to another.

Only a small number of slaves were brought back to Liverpool, to be sold at local auctions. Some became house slaves for the port’s wealthy families, who believed this was an outward sign of their wealth. Normally, they weren’t paid wages and were treated as property. Once enslaved, very few were permitted to leave or given their freedom.

The attitude to slavery began to change in Britain in the 1780s. Most notably, in 1787, the Society of Friends (Quakers) handed a petition for the suppression of the slave trade to Parliament.

In 1788, Liverpool Town Corporation formally opposed moves to abolish the slave trade. The rich and influential Liverpool merchants who profited from human trafficking weren’t giving up without a fight. More than 60 anti-abolition petitions were handed in from Liverpool. This brought them into conflict with abolitionists in the port. The abolitionists included powerful philanthropists such as the celebrated abolitionist William Roscoe, merchants who opposed slavery and many influential and prominent local women. 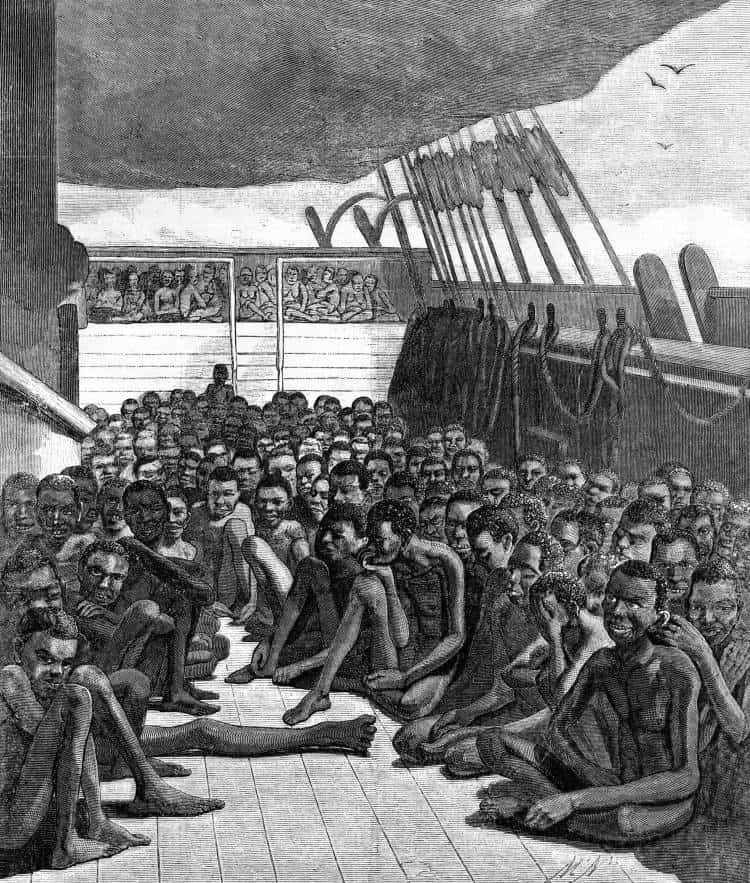 The slave deck of the ship ‘Wildfire’, was captured, transporting 510 slaves, from Africa to the Caribbean. Wood engraving after daguerreotype made in Key West on April 30, 1860 Photo: Everett Historical

End of the slave trade

Eventually, following years of acrimonious debate and public meetings, the Act for the Abolition of The Transatlantic Slave Trade was passed in 1807. However, the subsequent Slavery Abolition Act wasn’t passed until 1830 and only came into force in 1834. All slaves in the Caribbean were freed, although others, in some of the British colonies, had to wait longer for emancipation.

In the West Indies, for example, freed slaves were forced to complete a period of apprenticeship, when they worked for former masters for a nominal wage. It was 1838 before slavery was abolished completely.

The apology by Liverpool City Council in 1999, when remorse was expressed for the port’s role in the slave trade, provoked controversy itself when anti-racism campaigners argued it was too little, too late. They were particularly angered that the meeting was held in the town hall, where the walls are adorned with images of slaves.

Museums commemorate those who suffered due to the slave trade

Today, Merseyside Maritime Museum’s International Slavery Museum serves as a chilling reminder of the port’s involvement in the Slave Trade. Slavery Remembrance Day is commemorated every year, when a walk of remembrance is held.

The museum opened in August 2007 and by March 2010 had already welcomed one million visitors. It looks at all aspects of slavery and has become an international hub for information on human rights issues.

Across the Atlantic, the Smithsonian National Museum of African American History and Culture opened in Washington in September 2016. Its ethos echoes the renowned literature of black poet Langston Hughes. Based in Harlem in the 1920s, Hughes wrote that the African-American story was as central to the USA’s narrative as any other. His poem, “I too”, promotes the message that understanding black history and culture is crucial in understanding American history and culture.